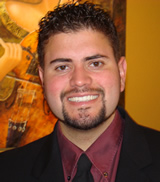 Mark Carroll holds a Bachelor's Degree in Music from the University of Nevada, Las Vegas, where he received his training in both music and music technology.

As a high school orchestra director in the Clark County School District (CCSD), he used the principles he learned while working in the University's MIDI lab to help him incorporate technology into his curriculum. The success of his efforts earned him the position of Task Force Chair for Secondary Music Technology for CCSD.

As the first person to assume this position, Mark is responsible for laying a foundation in the emerging field of music technology. By researching innovative technologies and supporting district music educators with technology integration through workshops and on-site visits, he has made the CCSD a model for others to emulate. Mark is currently pursuing his Master's Degree in Curriculum and Instruction, with an emphasis in Technology Leadership.

In the 2007-2008 school year, Mark was recruited to assume the position of Music Director at the Northwest Career and Technical Academy in Las Vegas. The Academy's new Music Program will incorporate the latest musical technology into all learning activities. Mark's expertise has played an integral role in establishing partnerships with large corporations that are leading the way in Music Technology and ensuring the success of his program.

Mark continually proves himself to be an exceptional music educator and classroom manager. All of his orchestras have continued to achieve the highest possible rating in the annual Clark County School District Orchestra Festival. As a low brass musician, Mark is also a marching band specialist. He is often called upon by high school marching band programs to be an instructor for drum major camps and band camps, as well as to assist with drill design.