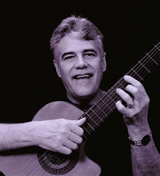 Bill Swick holds a Bachelor of Music and a Masters of Music Education from the University of North Texas. He began his teaching career at Drake University as Instructor of Jazz Studies and Guitar in 1977. In 1982, Swick moved to Las Vegas where he began teaching at the University of Nevada Las Vegas. In 1998, after observing a middle school guitar class, Swick decided to teach guitar for the Clark County School District. For four years, Swick taught guitar at a middle school, a high school and at the university on a daily basis. Swick is currently the guitar instructor and music department chair at the Las Vegas Academy of Performing Arts where guitar students receive over seven hours of classroom instruction each week. Swick has had more guitar students qualify for all-state solo and ensemble than any other guitar teacher in the state of Nevada. His students have performed at numerous national conventions including the 2003 NAMM Show in Anaheim, CA and the 2004 and 2006 MENC Bi-Annual National Conventions and the Guitar Foundation of America (GFA) national convention in 2007.

Mr. Swick is currently the music department chair at the Las Vegas Academy of Performing Arts, the CCSD Guitar Task Force Chair, Treasurer of the Las Vegas Guitar Society, and an active member of the GFA Pre-College Guitar Education Committee.